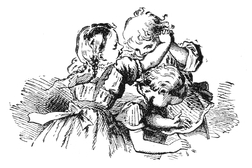 When it comes to estate planning, the combination of grief, money and family squabbles can be an explosive combination.  Sometimes it can be the oldest sister, who had her heart set on a deceased relative's painting, and would rather shred it than see it go to one of her younger. Perhaps it's two or three siblings, who spend thousands of dollars each in legal fees to get their hands on their grandfather's antique automobile. It can really be almost anything because, when you combine all of the elements common when a family member dies, you can get something akin to dynamite.

Literally hundreds of such battles occur every year in families all over the country. While many of the stories are simply ridiculous or annoying, many can be heartbreaking. Of course, iin almost all cases, such incidents happen for one reason; the person who died forgot the basics while he was alive. They failed to create a good, solid estate plan that takes into account everyone in the family  and makes the decedent's wishes clear as a bell.

Unfortunately, this is not an uncommon problem. According to a survey conducted in 2012 and released last year on lawyers.com, the percentage of Americans who have completed the most basic estate planning documents, such as a will or trust, is too small. It was always too small, but in recent years, the number has gotten even smaller, dropping from 64 percent in 2007 to 51 percent in 2012. Among the most common reasons cited by respondents for failing to prepare a plan was that they did not feel secure financially, and were more focused on paying the mortgage and buying food than they had been previously. If you have assets, and you have an idea as to who should get them, you owe it to yourself to prepare; otherwise, the family could see major battles after you pass away.

Clarify Who Gets What Before You Pass Away

The biggest reason families are sometimes torn apart after the passing of a family member is because of disputes over who should get which assets. Fights can start over just about anything at all, including money (of course), or the 80-inch big screen TV in the living room or the set of patio furniture in the backyard. But they may also fight over small trinkets that have meaning to them above and beyond what you may think of them. Stories abound of incidents in which people have smashed vases or tossed Grandma’s jewelry into the river, rather than let someone else have it.

A good way to avoid this kind of thing is to allow each and every family member in on the disposition of your assets long before you pass away. You can even ask each member of the family which of your assets they might want after you're gone. Then, when you've made your decision as to who gets what, put all of this information into your estate plan, and let each family member know exactly what to expect. This way, when the executor carries out your wishes, emotion is less of a factor.

Don't Wait for the Court to Name the Executor, You Do Ithim him

You can also defuse much of the emotion from the process by naming an executor yourself, as long as you choose the right one. In many cases, people tend to choose the oldest adult child, regardless of their abilities. In many other cases, the estate is placed into the hands of someone who is relatively disorganized and is not emotionally capable of handling the level of responsibility required.

Choosing an executor can sometimes be a tricky decision. While many people automatically go with family members, such a choice can breed resentment among other family members. That cannot always be resolved by including many other family members as co-executors, because too many co-executors can result in gridlock, especially if they can't agree on anything. In some cases, it may be prudent to choose an outsider, such as a professional fiduciary, to handle the estate. Such people often bring more authority to the table, in part because they will be seen as having no stake in the outcome.