Estate Planning for the Non-Traditional Family 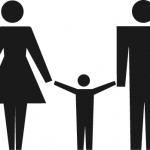 It's 2015, and let's face it; the idea of the "traditional family" has become very dated. Unfortunately, when it comes to putting together an estate plan, the laws still favor the "traditional family" as it existed back in the 1950s. If you have that, great; your plan will probably be easier to set up. But if it's not, there may be a lot more to think about.

If your family structure is non-traditional, you may derive comfort from numbers; you are in no way alone. In the United States, the number of households headed by married couples has been falling for years and continues to plummet. In 1990, the number was 55 percent, but by 2010, it was 48 percent. It's quite possible that number could rise when same-sex marriages are recognized everywhere, but there's no guarantee. Currently, despite the beautiful and hopeful wedding ceremonies we all see, around 40 percent of those happy newlyweds will divorce at some point and approximately 75 percent of them will remarry someone else. Of course, those marriages make up a large portion of those 48 percent of families headed by married couples, which makes "traditional" families a minority these days.

Tradition isn't coming back soon. More than a third of all births in the U.S. are to unmarried women. This can create numerous complications, especially whenn cases where the father is never identified, or the child was conceived using donated sperm. There is nothing "traditional" about any of that, and the lack of a second parent can make the need for planning more urgent.

If you find yourself in a non-traditional relationship of any kind, whether you're single and raising a child, single and own several large dogs, living with someone without getting married, whether your partner is the same or opposite sex, or you have been married multiple times, or have children by multiple partners, or any of a myriad number of other "non-traditional" family setups, you owe it to yourself to set up a plan that protects you and your loved ones in any situation. Here are a few considerations to think about:

The laws regarding distribution of property and rights in the event of incapacity are based on a tradition that barely exists anymore. There is no "norm" anymore, and you have to prepare for it.